To paraphrase baseball legend Yogi Bera, when you come to a fork in the river, take it.

And if you’re at the Forks of the Thames in London, Ontario, whichever direction you choose to walk will be a good one.

The Forks of the Thames is the convergence point of three Thames rivers:

The Middle and South Thames join east of London and the North and South Branches meet at the Forks in London.

The river system is 273 km in length running west to Lighthouse Cove just north of Windsor. It empties into Lake St. Clair not far from the Canada/U.S. border shared with the State of Michigan. 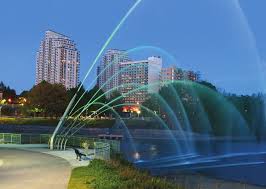 Evening at the Forks of the Thames looking east towards downtown London, Ontario.

Today we’re going to take an easy two kilometre walk starting at the Forks and going north along the North Thames River. That will take us through part of the Blackfriars neighbourhood on the west bank and parallel to downtown London on the walk back along the east bank.

Let’s start by getting you situated.

The Forks of the Thames is located in the heart of London and is one of its most important historical landmarks. Formed from the glacial retreat some 15,000 years ago, the first traces of settlement were made by indigenous people more than 11,000 years ago.

The Thames River also played a significant role in the War of 1812 against the invading Americans. The great chief Tecumseh was killed not far from here in the Battle of the Thames.

The first courthouse was built just to the east of the Forks along with a farmers’ market and a business district, which is now downtown London.

The old courthouse still stands today, although somewhat modified. Museum London was built across the street in 1980 and now houses an art collection of more than 5,000 regional and Canadian works and 45,000 artifacts. 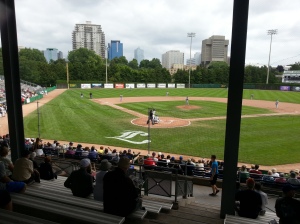 To the east, is the historic Blackfriars neighbourhood, an early trades and crafts community, now gentrified. Anchoring the neighbourhood is Labatt Memorial Park, home to the London Majors which plays in the Intercounty Baseball League.

About 75 km east of this location along the North Thames in St. Mary’s Ontario, sits another piece of Canadian baseball heritage, the Canadian Baseball Hall of Fame.

The Blackfriars neighbourhood is an inviting collection of modest Victorian homes, nicely restored and maintained. The area is best known for the historic Blackfriars Bridge, the first iron bridge built in London. 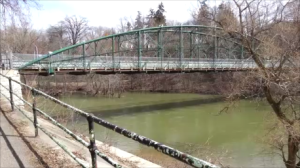 The bridge’s unique wrought-iron construction and bowstrong arch design stretches 212 feet and is one of the few remaining of this type in Canada. It became a pedestrian-only walkway in 2013 but discussions are underway to reopen one lane eastbound to vehicle traffic.

Crossing the bridge, the grand Blackfriar Estate is perched atop the steep river bank.  Built in 1870 by business magnate Thomas Kent, it was sold upon his death and became the residence of Roman Catholic Bishops in the diocese. Sold in 2008, the property has been converted into the Blackfriar Estate Condominiums.

Descending the steps back down to the river, the forest opens up to the flats of Harris Park, home to a variety of London events including Canada Day celebrations and Rock the Park.

The Forks draws families and individuals who enjoy the children’s play area, picnicking as well as using the pathways for jogging, cycyling and walking.

If you live in London, you’ll enjoy getting reacquainted. If you’re visiting, it’s an enjoyable way to relax before exploring other parts of the city.

4 thoughts on “Walk Your World: Forks of the Thames River”